This is the My Place in Poptropica story of Gentle Fang, who stopped playing Poptropica for a while because she felt too old for it, but returned to it for the challenge and fun she’d missed. See below for how to send in your MPIP! 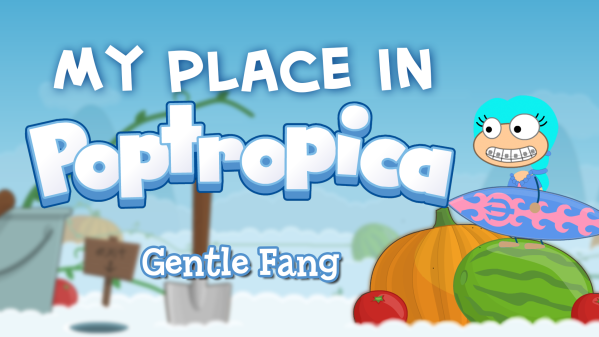 Hey everyone! I am Gentle Fang (a brilliant oxymoron of a name). I wrote a guest post back in February with a little island history, and decided to return and do a My Place in Poptropica post for fun. Enjoy!

In 2012, I was in second grade, and was seven years old. I always loved to visit FunBrain.com, and in the website’s games there were constantly Poptropica advertisements. The characters in the pictures I saw looked pretty cool to me, so I asked my mom if I could play.

She agreed to set up an account for me to use, although I was not allowed membership to the game. Upon entering, I clicked the first island I saw: Zomberry. I was frightened by the purple zombies back then, but now I see them as nothing to be afraid of. Since I was scared, I quickly exited out of the game. Sadly, I have no idea what my old username was.

When I was in fifth grade, I moved to a new school for the seventh time in my life. I had come from a school where I was very well-liked by the students and was very close to them, so when I moved, I expected it to be just the same as the last school. However, I turned out to be very wrong.

I met lots of kids who were very different from what I was used to (in a good way), and most of them didn’t like any of the same things I did. I got very shy around these kids, and so I had no one to be around when school was over. The work was also kind of boring to me because the curriculum at my new school was behind on what it had been at my old school, so much of it was review for me.

It was out of boredom that I went back onto FunBrain one night, and once again, I saw the Poptropica ads. I thought back to second grade and the scary Zomberry zombies, and was hesitant to join. However, I decided to do it again anyway, because I figured much could have changed as I got older.

I found that I loved the game, and tried to complete islands on my own, which was a huge challenge. I had fun changing my character’s outfits and making her hair bright turquoise. I chatted in the common rooms and even copied down some questions from the chats to ask to kids at school.

I got a very positive reaction, and found that many people who I thought were so different from me were actually quite similar. I made a few friends who I am still close to today, including my friends Isabella and Caroline. I found out that plenty of kids played Poptropica, and one even showed me the PHB, so completing islands wouldn’t be so hard anymore.

It was also on Poptropica that I discovered how much I love theater, especially musical theater. I watched as Gentle Fang cried off of the stage on Reality TV Island and how she would sweat nervously in Game Show Island, and I myself became very good at acting out the very same emotions my character acted out. After fifth grade, I joined the drama club at school, which helped me to get a ton of friends.

2016 | A break from an obsession (and forming some new ones)

In 2016, I entered middle school. I LOVED IT, to say the least. I felt like I had a lot more independence, but also felt I was “too old” for some things.

For one, I felt that it was time I abandoned the pink decorations on all of my stuff and replaced it with boring old zebra stripes. I also developed a new obsession of listening to Hamilton over and over again. And, more relevant to this story, I came to think that Poptropica was too babyish for the eleven-year-old that I was and not worth my time anymore, so I stopped playing.

This year, I felt I was lacking a challenge, some sort of game that would test my logic and reasoning. I realized what I was actually missing was Poptropica. I missed the challenges the islands presented to me, and I missed the fun social interactions that resulted from it. I realized that the only thing I was actually “too old” for was my own brain.

So, I decided to give myself a mental refresh, in which I realized it was dumb to get rid of things I loved so much just because I was getting older. I quickly went back to Poptropica, replaying all of the old islands and laughing at some friends’ outfit choices for their characters.

I went back to Gentle Fang and took her for a long shopping trip in the store. I had tons of fun, and I am working on my Poptropica Worlds account now. While my newer obsession of Hamilton songs continue to play in the background, I am so happy to have gone back to my older obsession of a game that brought me great joy.

If you haven’t already, we invite you to send in your own. Please include your username and a minimum of 500 words, typed with good spelling and grammar, and divided into labeled sections. If you send in your story, we will continue to post new community MPIPs!

13 thoughts on “My Place in Poptropica: Gentle Fang”