This post originally appeared on Clawtropica and is being shared on the PHB courtesy of the author, Purple Claw. If interested, you too can write for the PHB!

Hey there, Poptropicans! It’s me, Purple Claw, here to talk about a question I’ve been asking myself for a while now: Is Poptropica Worlds a more educational game than Poptropica Original? Let’s take a look.

To answer the question, we have to do a little research involving a pop down memory lane…

Although Poptropica is more on the entertainment side than educational, it does have some learning benefits. Or, at least it started out like that — Poptropica’s first three islands were pretty educational. Here’s why:

Early Poptropica and Shark Tooth Island had two very similar buildings: they both had museums. One being an art museum, and another full of shark facts; you get the idea.

The Pop Art museum is pretty much like any art museum, but what stood out the most was were the questions you could ask each artist — questions about their drawings, their personal life (such stalkers we are), etc. It’s pretty fun. The Shark Museum, on the other hand, simply had facts about sharks, but even that was literally my absolute favorite part of the island.

Time Tangled Island is one of Poptropica’s most educational islands, and unlike the first two islands mentioned, it’s got a different method for integrating education. Before it became a sound-updated island (SUI), you could find some circles around the island leading to articles from Fact Monster, a Poptropica sponsor and educational website where you can get help with homework and stuff. (It’s actually pretty fun.) 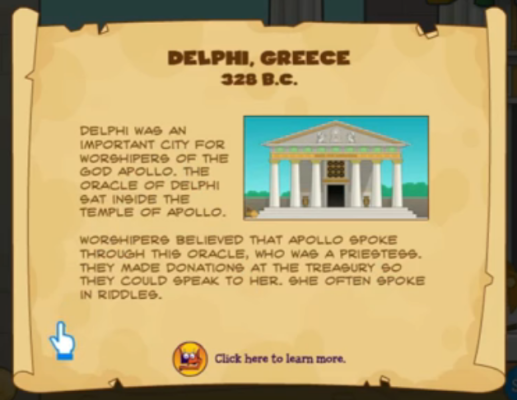 This was a new thing for Poptropica, but it didn’t last long with the release of 24 Carrot Island, and I’m glad, since those Fact Monster monstrosities can really get in the way of your gameplay. Glad I never got to experience them.

Unfortunately (or maybe fortunately for some other players) the following islands stopped being educational in an obvious way (examples: 24 Carrot, Super Power, Big Nate). Nabooti did have a small artifact museum, but besides that, maybe they wanted to focus more on entertainment.

This all changed with the release of Counterfeit Island, which fell in the ”museum-kind-of-educational-island” category. The following islands of Poptropica weren’t all educational: but there were still plenty that drew inspiration from real-life environments, such as Red Dragon, Mythology, Arabian Nights, etc.

So, we can all probably see how Poptropica Original can be educational, but what about Poptropica Worlds?

Well, since Poptropica Worlds has a grand total of two islands, there isn’t too much to say about it yet (I’m excluding Home Island here, since it’s not really a quest like the others). But I’ll give it a shot.

Well, just like Poptropica’s first two islands, Poptropica Worlds has decided to have museums, and I’ve got to say, it does much better job than Early Pop and Shark Tooth.

Crisis Caverns’ museum is the Visitor’s Center, which has displays with facts about the supervolcano and other geological things. The building itself is an important part of the island, since it plays a part in moving the plot forward by [mild spoiler] giving the park ranger the elk antlers.

On the other hand, Early Poptropica’s Pop Art Museum had nothing in common with the island (well, it had one thing in common if you count the fact that it’s the pop art museum), but besides that, it didn’t add anything to the plot, so things were less interesting there.

Back to Worlds, the remastered 24 Carrot is simply gorgeous — it’s literally what made me like Worlds in the first place! The plot was improved and the visuals were really pretty. But, since Poptropica Words still isn’t much of a social game yet, what was once the common room on the old 24 Carrot had become a Carrot Museum. Which isn’t really all that bad, because just like on Crisis Caverns, this museum also moved the plot forward.

By the way, you can view all the displays for various Poptropica museums without logging into the game by checking out the PHB Island Guide pages with Museum sections.

WHICH GAME IS MORE EDUCATIONAL?

Well, as of now, I’d have to say… drumroll please… Poptropica Original.

Why? Well, for one major thing, it has more islands, which means more variety. But considering the trend on Worlds of the museums being integrated into the islands, I believe Poptropica Worlds will also be considered a pretty educational game. After all, the island museums are pretty fun to look through, and you’re bound to go into them at some point during the quests.

Poptropica Original has had its doses of learning about the world in various forms – from the obvious museums to the less conspicuous designs that might spark your interest in subjects like spies, mythical creatures, or certain historical figures. And from what we’ve seen so far, the Creators have been doing an even better job on that with Poptropica Worlds. I hope it continues.

Thanks for reading this analysis! If you enjoyed reading it, check out the original post on Clawtropica, and browse the blog for even more cool content!

Plus, if you have experiences of learning about something through Poptropica – whether you realized it or not – we’d love to hear about it, so share your perspective in the comments below!

That was PC, signing out! Luv ya guys!