Hey Poptropicans – get ready for some secrets to be spilled to society!

In this post, the PHB takes on the latest Poptropica graphic novel release, The Secret Society, which came out this April.  You can get this book – the third in the series – on Amazon and some bookstores. This review will discuss the storyline, presentation, characters, and more – so be prepared for some (but not all) spoilers if you read on.

If you aren’t quite caught up with the plot, be sure to check out Mystery of the Map (the first in the series) both as an island you can play on Poptropica right now or read in graphic novel format (either on our Comics page or in the print version as a book). Following that is The Lost Expedition (the second book), for which we recently published a review here (and of course, you should check out the book as well).

And now, let’s get into the review!

The story picks up where The Lost Expedition left off, with the kids trapped on board the mysterious Secret Society’s hovercraft. They finally reach their destination, the headquarters of the Secret Society, where they meet the leader Spencer Albright, who explains just enough of what’s going on for the kids to catch up. Here’s where we get the interesting knowledge of how exactly the Poptropica timeline works. Ready? 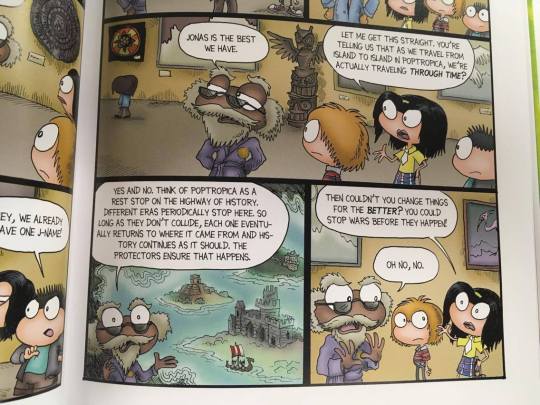 As Spencer Albright explains, Poptropica is a unique holding place for islands throughout the timeline of history to just chill, but interfering with their events could have major consequences, which is why the Protectors are there to stop such meddling. As we know from the previous books, Octavian has a time device and is doing some unlawful meddling – and it’s starting to have some negative side effects on history.

So, as Albright and the Protectors scramble to undo the damage – which isn’t going very well – the kids take it upon themselves to help. As worse comes to worse, tensions rise, and each character finds themselves struggling to work together, with personal reasons getting in the way. 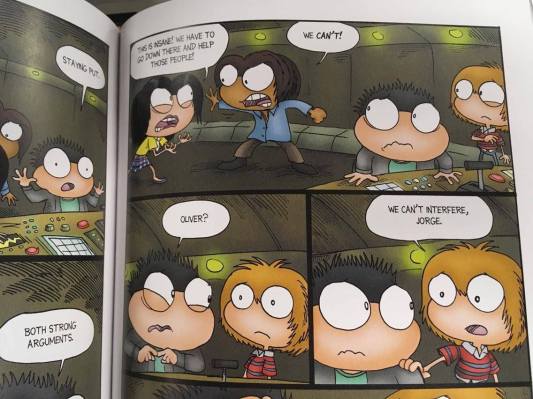 Eventually, we get to face Octavian up close, who is seen ferrying the people he cares about, including a lover – the ones he is willing to destroy history to save. And with some explosive encounters, the kids – in particular, Oliver – finally figures out what he must do to put a stop to Octavian’s out-of-control attempts at control. But even still, they’re not out in the clear just yet… and that’s where we wait for book 4 to wrap up the tale. 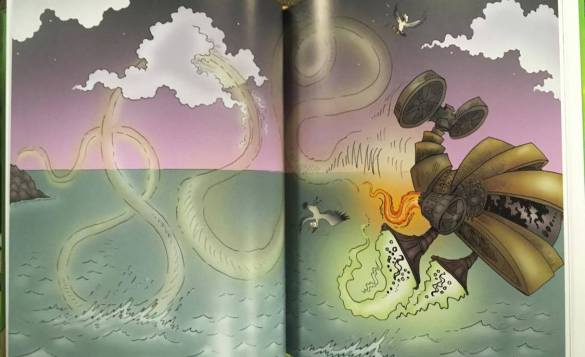 As with the other books, illustrator Kory Merritt brings a very distinct style to the pages, characterized by thin lines, gradient coloring, and comical details.

Although the art style is different from what we see in the Poptropica game, it fits into the comics. Often, facial expressions are exaggerated, sometimes to a point where they look a little odd, but that’s the way it goes. Personally, I find the textures and simple lines to be a bit hit-or-miss: while they can work quite well in some scenes (such as the depictions of the Aegis and volcanic lava), at other times they feel incomplete, with shapes merely given a little color.

Something that the illustrations do well in are the sweeping larger-scale panels, which depict whole scenes but also include little details, such as in the spread above of the hovercraft and its whimsical path and frightened seabirds. We also get to visit a couple of exciting places from history: ancient Egypt and Mount Vesuvius.

In addition, this book’s illustrations has some interesting little details embedded within! For example, there is a reference to the meme of Joseph Ducruex (Archaic Rap) hanging on one of Albright’s walls. Later, you can also catch Jorge reading a magazine with Dr. Hare’s portrait on it. What other tidbits did you catch?

Even the inside covers are cleverly done with maps, like the previous two books. This one is especially interesting, because unlike the other two books, they start and end with the same magical map – except with changes reflecting the beginning and end! In both, you can see that we’ve started and ended similarly – flying just above a certain island in the hovercraft. 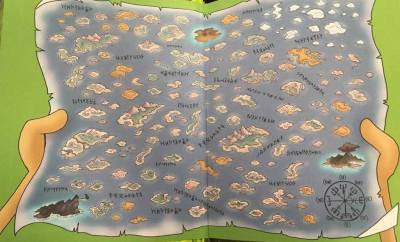 In our review of book 2, The Lost Expedition, author Mitch Krpata left a comment about one of the main characters in book 3: “The Secret Society focuses a little more on Oliver, and his conflict about what leadership to follow.”

And indeed, Oliver is often faced with challenges with others. But he’s very determined about his convictions, even in the face of disagreements. There are a few times in the story when he’s conflicted with his sister Mya about the right thing to do. But the bigger question for him is, are his decisions any better than the villainous Octavian’s?

Mya, for her part, is unafraid of diving headfirst into places where she sees a possibility of saving people, sometimes ignoring the dangers that come with those options. Oliver adamantly opposes, but as things heat up (quite literally), he begins to realize that interference can be in his hands (again, quite literally). 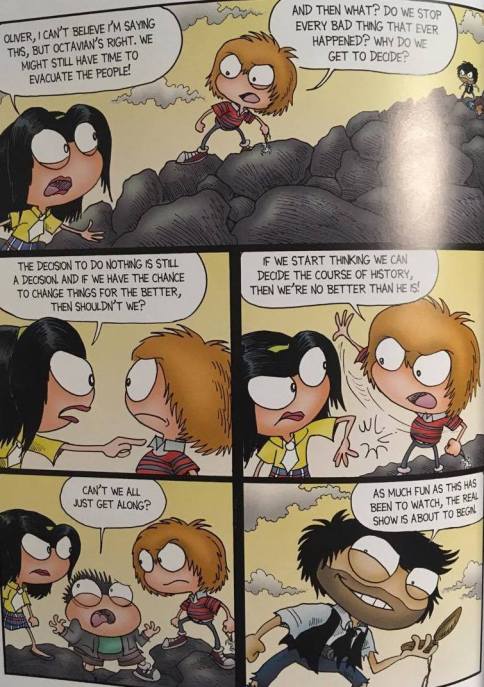 Meanwhile, Jorge continues to be the self-concerned comic relief of the series, his mind often thinking more of food than the mission at hand. Still, as he continues to see his friends so invested in the issues surrounding them, he starts to care a little more as the story progresses. Perhaps we’ll see even more development from Jorge in the final book.

Early in this installment, we’re introduced to a new character, Spencer Albright, the leader of the Secret Society. Despite kidnapping our favorite trio, the Secret Society of Protectors turn out to be the good guys – at least as far as we can tell. As Spencer explains, their goal is to prevent people from meddling with history, protecting the strange timeline of islands of various time periods that randomly stop by in the realm of Poptropica. Nobody is allowed to intervene with the course of history.

The Secret Society headquarters houses an impressive collection of ancient artifacts from history, some of which later get erased. As dangers rise, Spencer – who we learn is descended from Egyptian nobility – finds his very existence a point of conflict as well.

We also meet Jonas, Spencer’s trusty right-hand man. He seems at first to be an easy-going fellow, happy to play his part in helping the Secret Society. However, as worse comes to worse, things get very personal for the protégé – and his actions become fraught with emotion, making his character’s development also an interesting one.

Finally, of course, there is Octavian, who brought the kids into this mess back in book 1. And now we see the reason he’s causing all this madness in the first place: he has a lover, and he’ll stop at nothing to get her back. We don’t know their story just yet, but we do know Octavian won’t stop bending history until they’re reunited.

Octavian also seems to have some history with Spencer Albright, and it’s clear the two don’t agree on the right approach for handling the power they have for controlling the timeline of history. So far, things have only turned into a real hot mess, leaving us to wonder how things will play out in the end.

On the whole, The Secret Society is an excellent continuation of the trio’s adventures from the earlier Poptropica graphic novels. While we had some questions answered, such as what exactly Octavian and the Secret Society was up to, we were opened up to new questions, like how Octavian and Spencer came to such drastically different views for operating the timeline. Because of the deeper insights into how Poptropica islands worked, I thought that this book contained more meat than the others so far. 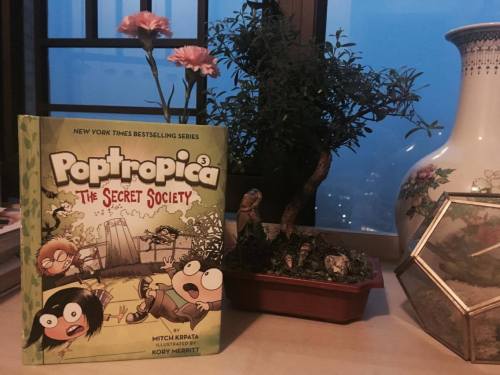 I also was intrigued by the whole history-alteration plot, and the book raised interesting questions about how we might act towards things we could control, as well as things we couldn’t control. It brings up conflicts about systems put in place for protection, and about following our own gut versus listening to others. Though the story is fiction, it depicts a reality in our own world: we don’t get to choose the way everything is, but we do get to decide how we respond. And how we respond, of course, has ripples.

Oliver asks the very thought-provoking question, “Do we stop every bad thing that’s ever happened? Why do we get to decide?” Unless we have a time device like these characters do – and even for them, it is limited – we don’t get to undo everything we don’t like. We see these characters realizing that some things are within their control while recognizing that other things are not. And that’s something every one of us has to deal with, too.

The story contains both comedic moments and serious ones, and overall, it’s a fun book for any Poptropica fan. It’ll leave you hanging on for what comes next as we await the final book, The End of Time, coming out this fall of 2017…

Have you read The Secret Society yet? What do you think of the story, particularly with regard to what it says about the structure of the Poptropica universe? And would you change the course of history for any ulterior motive?

Share your thoughts, concerns, and criticisms in the comments below!