This is the My Place in Poptropica story of Young Spinner, a longtime on-and-off player whose favorite costume is the Lumberjerk. See below for how to send in your own MPIP! 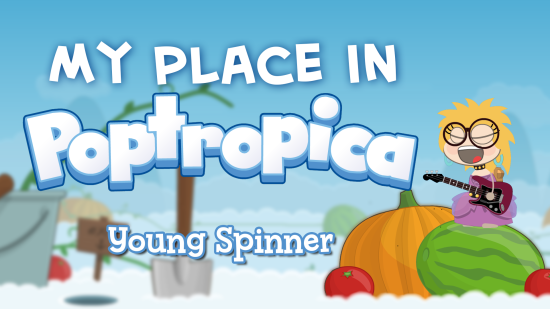 Hi, guys! My name is Young Spinner, and this is My Place in Poptropica; the full story of my Poptropican life. Enjoy!

I remember pretty clearly the day I first discovered Poptropica. It was just before the Christmas holidays when I was in second grade. During a technology class, our teacher wrote up some games on a whiteboard that he thought were appropriate for our age, and as you might have guessed, Poptropica was among the list (even though I now know better – Pop is for all ages!). I can’t remember any of the other games from that little list now, but in any case, I was intrigued when I saw the name ‘Poptropica’ – it sounded quite interesting to my seven-year-old self.

So, I visited it, created my first-ever Pop account (whose name was Shaggy Goose) and played Early Poptropica. Upon completing my first island, I fell in love with Poptropica. And that was back when there was only one island and almost none of the features Poptropica has today – so imagine how much more I love the game now!

I continued playing Poptropica up till sometime in 2010, and then I stopped. How and why, I cannot remember, but I definitely have zero memories of playing Pop in 2011.

When I was over at a friend’s house for the first time with her, I re-discovered the joy of Poptropica! This was on the very day that Twisted Thicket was released to members, and my friend told me about Poptropica, not knowing that I had played it for four years straight previously! I had forgotten about the game, and so I watched my friend play Twisted Thicket on her computer using her Poptropican, who was named White Bee. As a member, she was probably one of the first people to play Twisted Thicket (though evidently not in the top 10).

This was also when I realised Poptropica had memberships that would enable you to get a great deal of cool paraphernalia within the game. I don’t know how I didn’t know about it before, since memberships began when I was still playing Pop in 2009, but I digress. I saw the limited edition Lumberjerk costume in the Store, and with one look at it, I decided I wanted it so much, with that rumbling chainsaw and helmet with a changing light – but it was only for members! It was so close, and yet so far.

Naturally, I begged my parents for a membership, but they refused. After that disappointing incident, I returned to checking into Pop everyday – not just to play islands that I had missed out on during my hiatus from the game, but to gaze longingly at the Lumberjerk card in the store (which probably didn’t help my despondency) until it simply disappeared from the Store as soon as I (and other non-members) could play Twisted Thicket.

Poptropolis Games arrived a little while after, and I knew this was certainly not a normal island as soon as I had to select my Poptropican’s tribe (forever Nanobots!) at the start. The events in the island weren’t too hard for me, except for Triple Jump. My friend White Bee suggested Poptropica Secrets’ Poptropolis walkthrough, created by a Poptropican called Fierce Moon, which did indeed help me complete the island. Even though I was just about on the brink of discovering the rest of the Pop community then, I did not go any further than going to Poptropica Secrets that day.

The other thing that resulted from Poptropolis Games was that my mum watched me play part of the island and evidently thought that Poptropica was a good game, because she bought me a six-month membership! Although it, of course, never got me the Lumberjerk costume I’d always dreamed about having, it did get me a limited edition, members-only Zaggy Moondust costume from Lunar Colony, whose hair I absolutely loved, and I still wear it to this day on my Poptropican.

One day when I was pretty bored in the summer of 2013, I started searching up more Poptropica blogs. I ran across about ten different Poptropica fan blogs, but finally landed upon the PHB, since most of the other blogs I had gone through had mentioned it several times as a sort of superior site when it came to Poptropica blogs.

From what I gathered from the other blogs, only the best Poptropica bloggers made it onto the PHB team. But even with that knowledge, weirdly enough, I didn’t even look through the PHB’s posts – all I did was somehow find the Xat PHC, and afterwards I forgot about checking out the PHB again. I went on the Xat chat a few times weekly, under the name BunkerPums (or something like that), although I didn’t chat a lot on there. But still, it was a relief for me to know that I wasn’t the only 13-year-old out there to play and love Poptropica!

On a chilly February day this year, I decided to go back to Poptropica after a four-year hiatus from the game. But when I tried to log into Shaggy Goose again, I realized that I had forgot her username, and therefore could not log in. I was quite anguished for two minutes, until I decided to make a brand-new account: Young Spinner!

Between my long hiatus, there were so many islands I had missed out on (20+ new medallions to get!), and there was something new I had just missed seeing in 2013: episodic islands! At once I began the steady process of playing all of these new quests.

Then I remembered the Lumberjerk card, and along with that the ‘glitchers’ I had encountered back on the Xat PHC, who knew about how to perform glitches in order to obtain ‘rare’ costume parts. I surfed the internet again until I found the PHB’s Avatar Studio Gift, which had the very ASG with the costume I’d dreamed of having for five years straight: ASGbyEvra#2!

After about a week enjoying my fabulous new Lumberjerk dress-up, I took notice of the costumes of Slanted Fish and Happy Lobster, who both had amazing, signature, original looks, not just an outfit that was mostly from one common costume (sorry, Lucky Joker 😛). So, I returned to the PHB’s ASG page and rifled through the multitudes of ASGs until I assembled an original costume that I really liked. You can find the costume of yours truly on this post’s main graphic!

Moving away from my fashion dilemmas, I decided to check out what else was on the PHB beyond their ASG page, and came upon the homepage with all their blog posts! As soon as I read a few of them, I realized why it was that only the best Poptropica bloggers got to work there. The PHB was one of the most superb sites I’d laid my eyes on – and this was made by people who were, on average, quite close to my age!

On that note, I plan to open my own Poptropica blog in the very near future for all to enjoy – so keep your eyes peeled!

If you haven’t already, we invite you to send in your own (please include a minimum of 550 words, type with good spelling and grammar, divide it into labeled sections, and include your username). If you send in your story, we will continue to post new community MPIPs!

18 thoughts on “My Place in Poptropica: Young Spinner”