As I logged on to Poptropica this morning, I noticed that something pretty exciting – with a very bright, eye-catching design – had just popped up on Home Island: a Movie Theater!

“Movies” coming soon to Home Island? Yup, that’s what it looks like, and I have a few guesses as to what these movies could be. But before we get into the theories, shoutout to Fierce Flyer for being the first blogger to notice and post about this update!

Now, we don’t know what exactly this will entail, but the wheel guy beside it has hinted that whatever it is, it’ll be free (though not the popcorn): 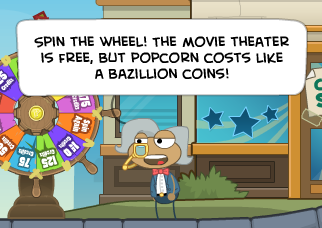 Now, while we’re waiting for the theater to open, let’s take a moment to consider some possibilities for the content of the movies.

Although the current map provides short written summaries for every island, and yes, I know the Creators have already made island trailers, new players would be more likely to find these trailers if they were accessible right there on Home Island. So, some (probably not all) of these movies may be already-existing island trailers.

Is it really a movie theater, or just the official ad hub? This probably isn’t the case, but I’ve seen many other online games add “movie theaters” filled with advertisement videos and nothing else, where watching an ad gives the player some kind of prize. If the Pop movie theater does feature ad videos, hopefully it will be in addition to other movies. If not, then  I’m sure the Creators could at least think of some awesome prizes.

It would be pretty cool if the movie theater had cartoons, not necessarily following the plot of any island, starring classic Pop characters. Also, the Creators might even use this as an opportunity to introduce new characters, whether those characters would eventually appear in future islands or just movies.

The theater may feature some movies that have already been mentioned previously through in-game posters, such as “Night of the Living Carrots.”

It’s also possible that the same movies won’t be playing all the time. Just as the availability of certain items in the Poptropica Store rotates in a cycle, it may be the same for movies.

Some things to consider

Regardless of what these movies consist of, there are a few things to consider in order to keep any expectations more realistic.

Well that’s all for my theories, and of course, I may be totally wrong. Share your thoughts on the movie theater in the comments below!

My name is Perfect Sky, but you can call me PS for short. I started playing Poptropica in February 2008, and you may recognize me from a Poptropica YouTube channel I started in 2013. I was going to edit my bio more but idk what else to say right now View all posts by Perfect Sky