Since we already covered most of the back story of Survival in the last file, I decided to make the rest of the files all about the upcoming episodes and give sneak peeks for what’s coming next.

First of all, the items for the second episode of Survival: a fishing pole, some grubs, another handbook (it’s different this time), handbook pages, a fishing costume, a hook, some pill bugs, 2 shoelaces, worms, and the island medallion. In total, there are 10 items in the quest. From the looks of it, you’ll be experimenting with different types of bait in order to get some fish. 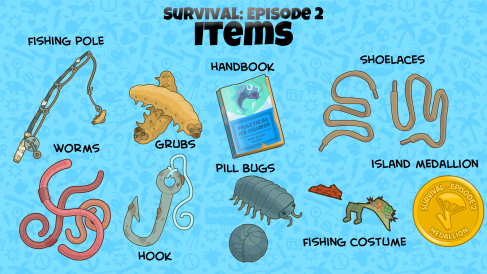 The forest is approaching spring in the episode, and things are starting to melt (if you don’t remember, Survival 1 was set in a winter theme). This allows you to fish around and get some food in order to survive.

With no help in sight, your hunger threatens to overtake you. Can you catch your next meal under the ice — or will you become fish food?

The episode’s game play involves assembling a working fishing pole and obtaining a sufficient bait. Along with that, a suspicious character whom we don’t know the name of will cross paths with you on the quest, and from the looks of it, he’s quite superstitious and perhaps a fisherman. 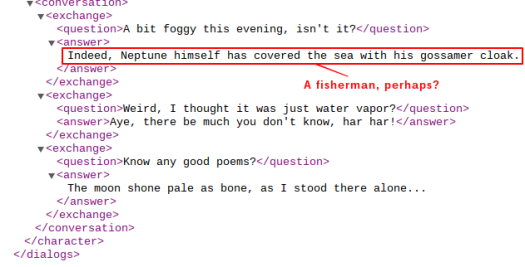 But Survival 2 isn’t where the story starts to get interesting — it’s the third chapter that the events lead up to the rumored Van Buren character — and I’m here to say that Van Buren is real.

They’ll probably take a different route with the story this time — Van Buren rescues you, but the more that you learn, he’s actually an evil poacher. I really like how the story is going, and it’s becoming my favorite out of the two, even though I was leaning toward Mission Atlantis previously. I have a good feeling about the Survival series. 😀

13 thoughts on “The Survival Files: more on the story”