This Poptropica Help Blog (PHB) turned 5 years old on July 26th, 2013, and we celebrated with fun and friends new and old on the PHC and Poptropica. Thanks to everyone who came to the party! 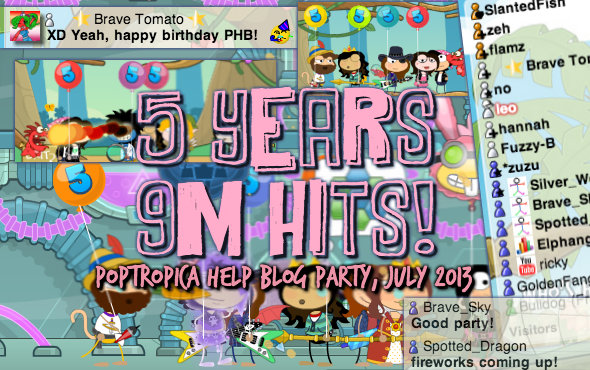 Ubiquitous color-changing 5th birthday balloons, head-to-head game battles, and special effects like Fireworks took place in Multiverse rooms that tended to fill up quickly, while on the PHC, people were chatting and got to meet some of the PHB authors – Slanted Fish, Brave Tomato, Fuzzy-B, Enclosed Lightning (who retired), as well as other Poptropica bloggers like Spotted Dragon and Silver Wolf.

Even if you couldn’t make it this time, remember that the PHC is always available for you to hang out with other Poptropicans! Thanks to all you readers for sticking with the PHB and we hope to continue being your Poptropica key! Don’t forget to be awesome.

44 thoughts on “5 years of Poptropica Help!”