Note: You must get the members-only “Nano-Combat Training” from the Poptropica Store to play this mini-game. Once you have it, open it up in your Store items inventory and click “play this game”. 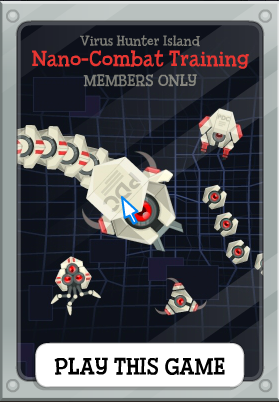 A screen will open, and you will learn a little about your little ship: the Panacea. In this game, you will be in the Panacea and move by clicking and holding with your mouse. You can change the ship’s weapon by clicking on it at any time:

Destroy ALL the things!

Let’s begin! The scientist, Dr. Lange, will start you with a basic tutorial: use the mouse cursor to aim, hold the mouse button to move, and finally, press the space bar to fire your weapon. Remember, you can’t respawn in the game. If you die, you will have to start completely over!

Now that that’s settled, it’s time to battle! Use the Pew-Pew to obliterate the simulated viruses. The Laser Scalpel will cut through almost anything, which might help when they’re getting too close too quickly, but you can’t shoot while using it. For the most part, the Pew-Pew should do the trick.

There are many types of viruses, the main ones having three versions — easy (white), medium (yellow), and hard (red). At the end of waves 3 & 4, there are also boss viruses (more on that below).

We’ll call the first type the tiny ones, or tinies. They come in single file lines. If you destroy each and every one in a whole line, you will get a power-up pill (see below for types of power-ups).

The second type of viruses we’ll call the octopus overlords. They have legs that kick, and help them move fast. As you shoot them, their eyes will get duller and duller until they are completely blank. They will then explode.

Another type to watch out for are the shooters. They come in groups and can attack you, so spin in a semi-circle, shoot at it until it shoots back, and repeat until they disappear.

Although these look intimidating, the snakes aren’t too difficult to beat. Just shoot at their heads, but beware of accidentally touching them or getting trapped if there’s more than one at a time.

Along with the above-mentioned buggers, you may also come across triangle viruses. These start out slow, then will spin and charge at you. To deal with them, fly around them and attack only when they’re alone. Shoot at them until they spin, then go behind at shoot, and repeat until they’re destroyed.

At the end of wave 3, you’ll encounter a big triangle boss virus that shoots spinning red bullets which can be hard to dodge. To defeat it, just keep shooting at it until it explodes, moving from side to side once in a while so it doesn’t get too close.

At the end of wave 4, you’ll come face-to-face with another boss: this one’s a snake that can shoot from both its head and tail. You’ll want to be at least level 3, if not 4, to stand a chance at defeating him, so don’t forget to collect enough red “POW” pills before the encounter. Dodge his bullets as best as you can, and head to a corner of the screen. Keep shooting at its head until it gets close, then run for the opposite corner and repeat until it’s gone.

Once you defeat this guy, you win! The game will say you made it to wave 5, but it ends there, and you will be presented with your final score. By the way, the virus-shooting in Virus Hunter Island is really a lot tamer than this – if you haven’t played the island yet, check out our Virus Hunter Island Guide!

Leave a Reply to A Miner Cancel reply