After years of silence, Willy Wonka’s magical chocolate factory is re-opening, and you’ve got a Golden Ticket. But when a group of misbehaving kids threaten to destroy Wonka’s candy creations, he needs you to save the day. Prepare to untangle a confectionary conundrum that’s full of sweet treats and sticky situations!

For walkthroughs on Charlie and the Chocolate Factory Island,
scroll down.

Getting a Golden Ticket

Welcome to the sweet world of Charlie and the Chocolate Factory Island!

You’ll get a Silver Coin, and as you walk back to the right, Charlie will walk out of his house unhappily. Follow him, and enter the Corner Shop on Main Street. When you get inside, he is right next to the counter.

Give him your coin so he can buy a Wonka Bar. He asks you to open it for him. Like the polite person you are, you open the candy bar, and behold: a golden ticket! 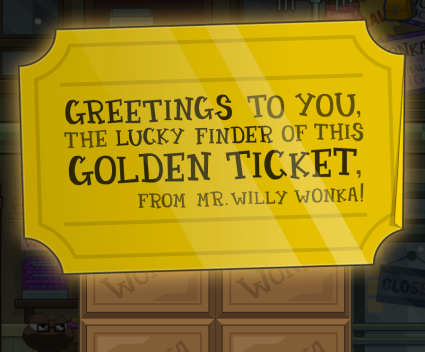 After you tell Charlie to run, push the people away and exit through the door. A mini-game will follow, where you have to protect Charlie from the chasing townspeople by slowing them down.

The next morning, the townspeople are looking for Charlie when a golden ticket flies out of the sky! The townspeople chase after it, and it goes into Charlie’s area, where his home is!

Run over to Charlie’s area to the left. Follow the ticket all the way up here. 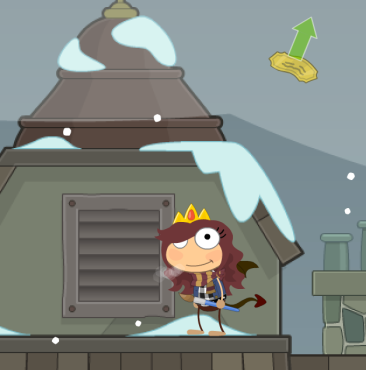 Finally, after all that chasing, you get the Golden Ticket! Gosh, those townspeople must be mad. 😀

Go back to Main Street, and run to the right, all the way to the Chocolate Factory. Wow, the townspeople are not even mad. Something’s up. Anyway, the gates to the factory open for you.

You go inside the gates, and all the kids who got a Golden Ticket (and their guardians) are there. The factory owner, Willy Wonka, asks for all the tickets, then welcomes each kid into the factory, you among them. 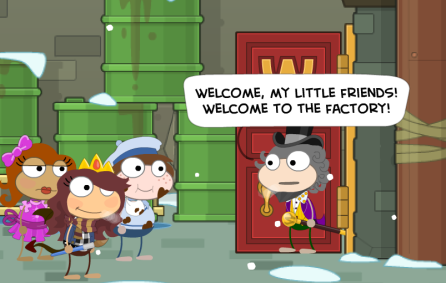 When you go inside, all the kids except you and Charlie act up and run away. Willy Wonka wants you to find them, and asks you to get him his cane, which is resting in the left corner. 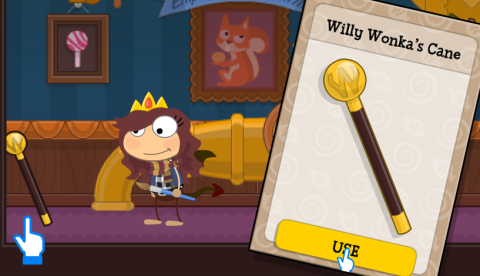 Once you have Willy Wonka’s Cane, run all the way to the right and drop down. You can now select which room you want to visit. Click on Chocolate first. 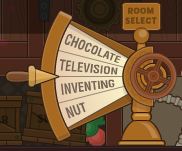 There’s a hand above that points which way to go. Follow where the hand tells you to go. After a while the hand leads you to the Chocolate Room, which looks like this (epic picture below by Poptropica artist Nasan Hardcastle):

Augustus Gloop, ever the greedy nincompoop, has gone nuts and jumps into the river… and now he’s stuck in a chocolate tube.

When you notice that Augustus is stuck, click on the green wheel beside the tube, and Augustus will be pushed a little ways up. 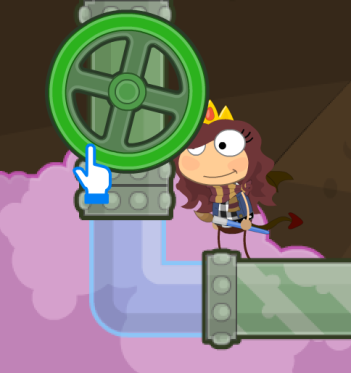 Then a bunch of Oompa-Loompas will come in and sing about Augustus, escorting Augustus’s mother to the Fudge Room to look for her son. Follow them there.

You’ll see Augustus stuck in a tank. Click on the wheel beside him.

He falls down onto the conveyor belt covered with chocolate. Jump all the way to the left onto a platform and click the green button.

Now, he can pass without getting chopped into pieces. He falls down to the next level, when he gets near the Wonka-Oven. Click on the button with blue fire.

When you press the button, the oven should look like this.

Quick! Now, jump onto the platform to the right and click this red button.

Now, when you press the button, the oven should look like this.

He’s going to go down to the last level. Click this orange button when he gets to the bigger Wonka-Oven in the last row.

Now when Augustus gets in between the flames, press the next button in line to switch where the flames come out. Make sure not to let the flames touch him.

When you finish, he comes out and leaves. You leave the room too, and come back where you choose a room to go to. Click on the Television Room, and follow the hands until you reach the room.

When you get to the TV room, you’ll find Willy Wonka teleporting his biggest candy bar through television. Then Mike Teavee decides that he wants to be the first person to be teleported through television. He gets zapped and finds himself in the television across the room.

There’s an Oompa-Loompa next to the television. He says he was watching his show but it went on the fritz, so he asks you to adjust the antenna. The antenna should look like this when you’re done: 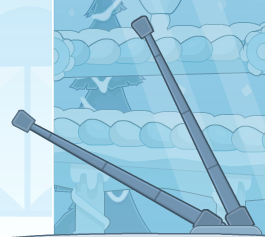 After you fix it, you’ll be able to see Mike clearly. An Oompa-Loompa comes onto the screen and leaves with Mike. Go into the Bubblegum Room.

When you get to the bubblegum room, you’ll see Mike hung up. The Oompa-Loompa tells you to go to the monitor to try to save Mike. It couldn’t hurt anything, right?

Keep adjusting him until it reaches the Poptropican size flashing in the middle of the screen. The claws alternate between stretching him horizontally and vertically, and you can adjust the amount by clicking when the bar in the corner points to either more or less. With each passing turn, he shrinks a little.

Once you’ve adjusted him as best as you can, go back to the halls and click on the Inventing Room. Follow the hands until you reach the room, and enter.

Violet Beauregarde is right next to the Gumball Machine. Step on the yellow button in the middle.

Some yellow bubblegum will come out. Violet will chew on it and, quite literally, turn violet! Well, actually, she’s supposed to be a blueberry like the dessert she tasted.

The Oompa-Loompas take her to the Juicing Room which is to your right.

Now you’ll have to save Violet. Adjust all the fruits into the right position (follow the picture below):

Click “go”,  and Violet will be squeezed back to normal size! Next, head to the Nut Room.

Veruca Salt is there, begging her dad for a squirrel. Walk over, and when you pass the squirrels, you’ll get a Walnut. Then Veruca jumps up and tries to grab a squirrel. Some squirrels jump on her and push her down a hole. Then they do the same to her father. You jump in after them. 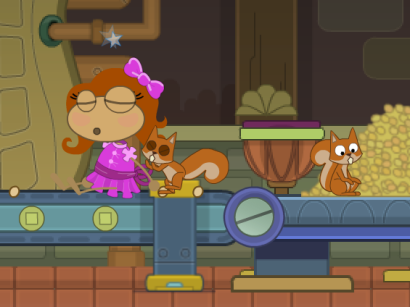 When you get to the room with the incinerator, jump up to the right and grab the Whipped Cream.

Then, pull the chain near the fan. A giant gumball will come out. Push it right to the fan. 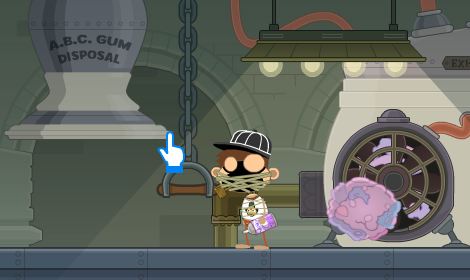 Pull the chain again, and push this giant gumball right until it falls into the doorway. This will block the squirrel that might otherwise come out if it were unblocked.

Jump over the giant gumball, then run right and pull the generator switch. 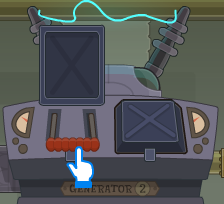 Jump down to the bottom left, where there’s another generator and a trash can. Push the bin back left until it is in front of the doorway. Then pull the second generator switch. Also on the bottom floor, pick up the Fizzy Lifting Drink. 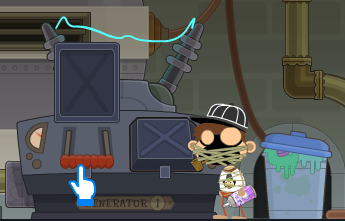 Think you’re done? Nope, another generator has started up again. Jump up and to the right, you’ll see a squirrel turning a wheel. Standing on the platform beside the wheel, use your Walnut. The squirrel will stop, and you’ll save Veruca Salt and her dad!

Hi, my name is Charlie, and I work in a chocolate factory…

When you go back to the hallway, you will notice that the “Chocolate” on the room selector is blinking. Click that, and follow the hands so you know where to go.

When you arrive, Willy Wonka is there with Charlie Bucket, deciding whether to give the keys to his factory to you or Charlie. Suddenly, the land Charlie was standing on breaks off!

Talk to Willy Wonka and say you want to save him. (You could also say you want the keys, but he’ll call you selfish and the Oompa-Loompas will take you away! You’ll get to try again, of course.)

Once you decide to save Charlie, a mini-game will begin. Your task is to make your way across the river. You can use the Whipped Cream to help you make temporary platforms for you to hop on. The orange logs are safe for you to jump on for any amount of time. Brown platforms in the river and grass are safe for a short time before they begin to wobble and eventually make you fall into the river if you don’t move fast enough. The bigger brown rocks are not as reliable.

Keep going right, and eventually you’ll reach Charlie, whom you save with Willy Wonka’s cane. 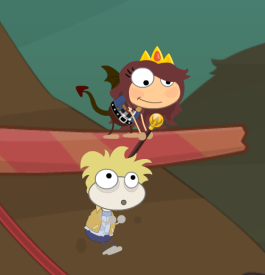 After you save Charlie, Willy Wonka decides to give the factory keys to Charlie, and you get a lifetime supply of chocolate and visiting rights to the factory whenever you want. And, of course, the Island Medallion, in all its red-and-white-striped glory. Congratulations! 😀

Wonka’s three biggest rivals have infiltrated the factory and absconded with his most important recipes! It’s your job to take to the skies and bring those recipes back!

Keep in mind, you are timed for all three rounds. You will have to retrieve the recipes in 40 seconds each time.

The prize is Helio-Gum! When you press space bar while chewing on it, your Poptropican will float up in the air for a moment and then fall back down. 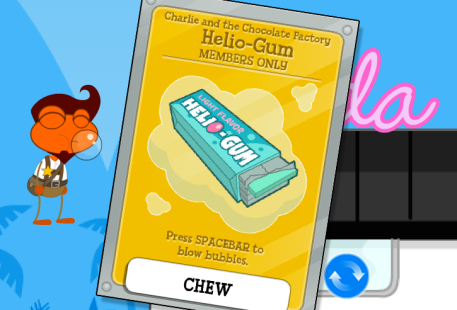 Looking for more walkthroughs? Check out our Island Help page! 🏝

oompa, loompa, doompadee-doo
i’ve got another puzzle for you

242 thoughts on “Charlie and the Chocolate Factory Island Guide”