Get ready for a whole new type of online virtual world adventure on Poptropica. Enter the comic strip world of Big Nate – a wisecracking kid who holds the all-time record for detentions at this school. You’re on a mission to find a long-lost time capsule which, if found, can save the school from demolition. You’ll need help from Nate and his friends to complete your online virtual world quest!

For walkthroughs on Big Nate Island, scroll down. 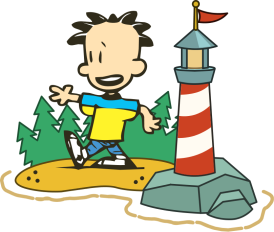 With only a Lobster, a pack of Stale Gum, and some Peanut Butter Crackers, you can find a Time Capsule any day.

When you arrive, you will be greeted by Big Nate. He’s on a search for a time capsule hidden a hundred years ago. Let’s join the hunt!

Head to your right and enter the shop named “Pop-In Shoppe”, a store run by Nate’s dad. At your left there is a bulletin with some background information on the time capsule. If you go to the top floor, on the green couch there is a comic strip frame. There are nine of these frames hidden around Big Nate island and they all join up to make a comic strip that will help you later in the game.

Go back outside and go to your right. Enter the “Klassic Komix” building, which is full of comics and other cool stuff. Once inside talk to the guy. He is looking for a comic he lost, he will provide you with a comic frame for it. Exit the building.

Pass the “Cap’n Salty’s” building, which is the island’s multiplayer room, and then enter the Photo Studio (the large camera), a building run by the “School Picture Guy”. On the right there is a comic frame sitting on a light. Pick it up then go back outside. Now on the right of the “Photo Studio” there is a telegraph pole you can climb. Climb to the the top to obtain another comic frame. Jump back down and go right.

You are now outside the school, where there is a large bell on the top (more information can be found later on in the guide). Head to your right and go inside the school. Inside there is a science lab, some rundown lockers, a detention hall, and a secret room. Go to your right, jump up the stairs and grab the comic frame. Enter the door labeled “Science Lab” on your left.

Once inside the room, make your way next to the science geek, a boy named Francis. Click on the chemistry set next to him. Turn on the heater to 4, then pour half of the beaker with blue liquid and half with yellow, which will make a greenish color. This will produce a Stink Bomb. It will be useful later.

Go over to your left towards the Mr. Bones skeleton model and grab the comic frame on top of the planet mobile. Make your way out of the science lab and out of the school.

Climb up the wooden scaffolding on the right of the school. Grab the comic frame on it. Now go right to the Playground.

Climb to the top of the playground and head left so you are on top of the climbing wall. Floating above you is a comic frame, so grab it. Go right and enter the ‘Kids Only’ house. Win the “Go To Jail” game to obtain the Peanut Butter Crackers. 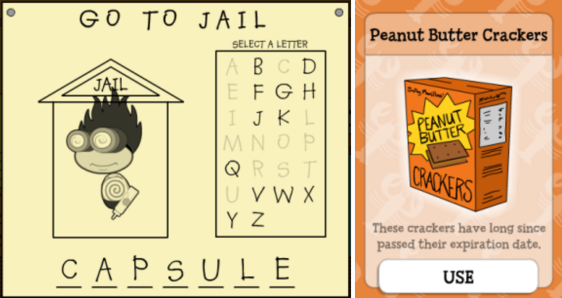 If you want to, you can win at “Table Football” to obtain a book called Big Nate’s Pratical Jokes (note: You don’t have to play Table Football, but you do need to win Go To Jail). Go back outside and travel right to reach “Puffin Point”.

Go right and climb up the Lighthouse. On the very top of the light house is a comic frame, grab it. You now have collected all the comic frames. Click on your Inventory, then examine the Big Nate Comic. Arrange them so they spell: “Nine Three Zero Five” in between the strip.

This is the order they are in (going from left to right, top first, then the bottom):

Once you have collected the Old Photograph, head back to Main Street by going left.

Keep going left, left, left, until you reach the Photo Studio building (the large camera). Enter the building. On the left you’ll find the ‘School Picture Guy’, who has a golden scuba suit he will trade for a photo. Swap the photo for the Scuba Gear.

Now leave the building. Walk left and enter the building “Klassic Komix”. Talk to Gordie (the shopkeeper) again, and tell him you found his comic. He will be so glad that he will let you keep the comic and let you have a Stale Pack of Gum as a prize.

Exit the building and go right. Make your way back to Puffin Point, so go right, right, right, right…until you reach it. Head right past the lighthouse and talk to Cap’n Salty. He needs your help to rescue the lobster trap from under the water. Go into your Inventory and put on the scuba gear.

Jump off the dock and dive down. Swim all the way to right until you can’t go any futher, then swim down until you reach the Lobster Trap. Pick it up and wait until your oxygen runs out.

Once you are back at the start, swim up. Talk to Cap’n Salty and tell him you have his trap.

He’ll let you have two items – the Lobster and Jet Ski Keys.

Jump on the skis on your right and ride away. Big Nate will challenge you to see who can get there first. The best way to beat him is to try keep your computer’s mouse as far to the right side as you can and to move farther and gain some distance from him. Be sure to jump over obstacles by clicking when you get near one! 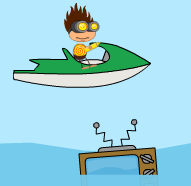 Once you arrive at the rocks (it’s called Sealsaw Rock on the Map) jump on the tilting, seesaw-like rock. Push both of the cute seals to the left side of the rock.

Now you can jump down and take the scroll. The scroll is the Map to Capsule. Ride back to Puffin Point. Climb back up the lighthouse to the light. Go to your Inventory, select the “Lobster” item card, and click “Use” to your lobster to turn the light around.

It will scare away the bird at the top of the school bell. Jump off the lighthouse and go left.

Go left to the Playground. The capsule is here but it is guarded by the girls. Go left, enter the school building, and jump up to the second floor. Run left to the lockers and click on one spilling with papers. Enter the locker code found on the comic – 9305. 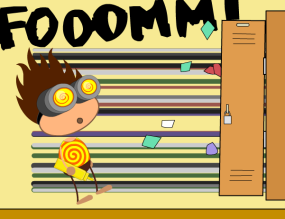 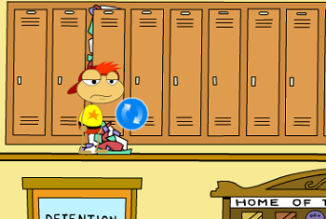 Once the locker empties itself, click on the papers again. You will find the School Blueprint. If you examine it you will see that there is a secret room. Now the only way to move the girls is to ring the bell, but the bell is missing its clapper. The bell clapper is hidden in the secret room.

Use the stink bomb to move the teacher. Go to the right and click on the filing cabinets. It will reveal a hidden ladder. Then go down. Once you’re down at the bottom turn on the power by clicking on the power lever. On the right above the work bench should be a bronze bell clapper.

Jump up and grab it to obtain the Bell Clapper. Make your way back up the stairs and outside of the school. Go to the top of the school, use the bell clapper, and ring the bell. The girls will now leave their place.

Go to the Playground and stand between the two posts, between the monkey bars and the logs. Open your items and use the Peanut Butter Crackers. The dog will then dig a hole, showing the time capsule hidden underneath.

Click on the hole and pull the capsule from it. Click the lock to open it. Watch the dialogue between Big Nate and his friend Jenny, who convinces Nate to use the valuable pearl inside the capsule to save the school even though he doesn’t really want to.

Once the newspaper (called “The Clam Courier”) appears, click close at the top-right corner of the gamescreen. You will then be confronted by the teacher who will award you with the Big Nate Island medallion and credits to spend at the Poptropica Store!

Congratulations! You’ve completed Big Nate Island. If you are looking for more things to do, take a ride in the blimp for a new adventure on another island. Or check out the multiplayer rooms located on Main Street, where you can chat and battle with other Poptropicans!

This island is the bomb!

Looking beneath the surface.

too cool for school