That’s right! This week marks the 50th round of PMFM and just so happens to be the same week that Round 1 released last year (Technically, the anniversary is Nov 16, but this week is this year’s equivalent Monday). It’s been a long road since last year. It’s been a crazy 12 months for me, not only here in the community, but IRL, as well. Really, I’m so thankful to have all of you guys giving me support for this silly series. I just want to thank all of those who send in submissions, all of you who are kind enough to like or comment on PMFM posts, and just an overall thank you to all of the viewers of the series for sticking on so long. None of this would be possible without you guys. Anyways, I just had to give my little speech. On with the show! Welcome to round fifty of PMFM (Poptropican Meme Face Mondays)!

The lucky meme-faced Poptropicans this week are Nice Hero, Teal Wings, and Cuddly Knuckle! And here are the memes:

Feel free to click on the images to view them in their full glory. 😛

Also, this Tuesday is Teen Arachnid’s birthday! 😀 I made a special meme face in celebration, which I hope you like, TA. Be sure to send your birthday wishes! 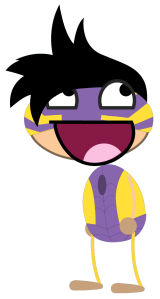 Want your own meme face?

This completes round fifty of meme faces. Tune in next Monday for the next Poptropican Meme Face Mondays!

What do you think about this week’s meme faces? Comment below.