Hey everyone! Remember Fuzzy-B’s post about Poptropi-Con about a week ago? Well, PHB reader Slippery Raptor went hunting for more clues to the island and discovered a recent Daily Pop discreetly containing the words “P-Con”, likely short for Poptropica Convention! 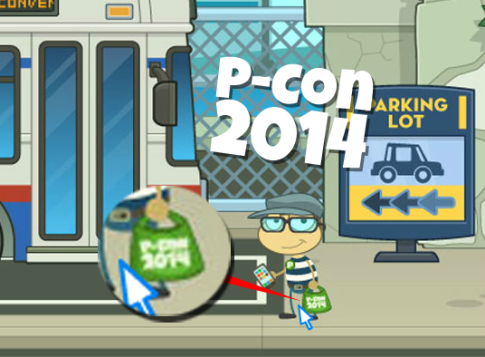 Sounds like it’s for a convention (as in MineCon or VidCon), plus the ticker on the bus (top-left corner) even says “conven”. I suspect this may be a future island, and according to the bag the guy is carrying, it’ll be out later this year, 2014!

With Survival on its third episode and Atlantis’s second episode due sometime today, I’d guess that “P-Con” may not be ready until around September or October. I really think this will be a cool island!

I'm a 15 year old boy that lives in Louisiana. I love baseball, football & soccer. I have been playing Poptropica for 5-6 years now, and I also run my own blog. My music interests are Owl City, Skrillex, Maroon 5, Flo-Rida, Bruno Mars, Deadmau5 & Zedd. View all posts by Samwow5

18 thoughts on “Poptropi-Con: the next Island adventure?”