Nearly a month ago, I announced the beginning of a colossal project – an RPG titled “Orb Legend“, following the adventures of Meridian Sinker and his many friends. My awesome team and I have been working long and hard on it since then, and I’m excited to share some updates below. 🙂

The soundtrack for the game is currently being produced by Taitoki (Kat), an amazing digital musician! She’s created leitmotifs for a bunch of the main characters, and themes for all the locations you’ll be visiting during your journey. We nearly have the entire soundtrack for the first chapter of the game, and Taitoki has released a few demo tracks on her SoundCloud so you can get a taste of the action. The complete album will be available for purchase on Bandcamp upon release.

Throughout the game, cutscenes will periodically play. These will feature more lovely music by Kat, voice acting from a number of talented actors, and amazing art by Feng Janelle. Check out some of her art for the game trailer below.

On every island that Meridian visits, he always happens to meet the Scavenger. No one really knows where she came from, but strangely enough, she knows everyone. Returning to her every once in awhile during a chapter will prompt certain sidequests that are subplots of the main quest. This exciting new feature will provide a much more immersive experience and make Poptropica even more real.

We’ve been pretty secretive about the story so far – and that’s for a reason – but I feel that in order to get you guys excited as we are, I need to spill some beans. As previously mentioned, there will be 6 books, each with around 4 chapters. Each book covers a character arc and a certain facet of the Poptropica universe. The first book, “The Winged Revolution”, mainly covers the existence of dimensions in the Poptropica universe – and the character arc is trust! 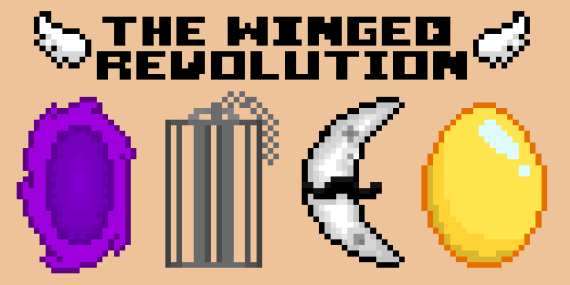 Each of those symbols represents one of the chapters of the Winged Revolution: Dimensional Warp, Animal Island, Dreamy Island, and The Golden Egg.

The first of these, Dimensional Warp, is the one that we’re planning on releasing by mid-year. Here’s a synopsis written by Giant Hawk:

The world of Poptropica is one unlike any other; filled with magic, art, technology, and adventure. But for top BHP adventurer Meridian Sinker, one world isn’t enough. He’s been searching for resolution all his life, and among the top questions he wants answers to is the secret of travel between dimensions. Unbeknownst to Meridian Sinker, however, a seemingly average monster containment mission is all it’ll take for him to finally start getting answers. But with said answers come even more uncertainty. Who can Meridian Sinker trust? Does dimensional travel have negative effects? Only one thing is for sure – this is only the beginning…

I hope all of this excites you as much as it does me! Prepare for wacky characters, insane stakes, and puzzling situations.

I’m going to stop posting these large updates on the PHB, so please go follow us on the Orb Legend Development blog. There’s so much more I want to reveal, and I couldn’t fit it all into one article! Also, follow us on Twitter! We tweet sneak peaks all the time.