Hey everyone, Spotted Dragon here! Did you like all that alliteration in the title? Eh, I tried. 😛

Anyway, there are just a few Poptropica updates that you should know about! First off, when you log in to Poptropica you will be greeted by two cool prizes. One of those prizes is a Charlie Brown Shirt and the other is the Pig Pen Power prize (which also just gives you the costume shown on the card, including the dust). 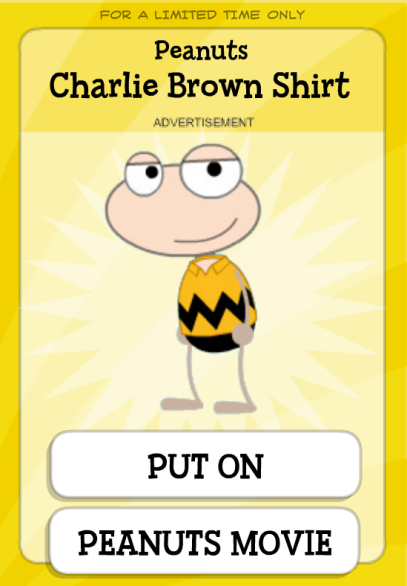 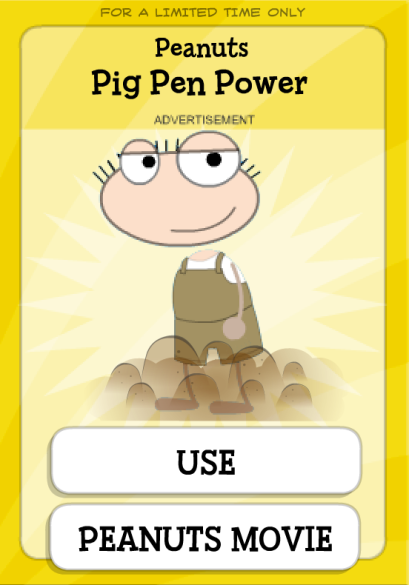 In other news, the Photo Booth has finally been updated for the desktop version of Poptropica! It now includes the Valentine’s Day items and props mentioned in a previous post that first appeared on the app. 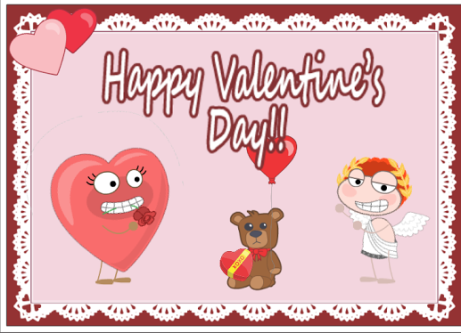 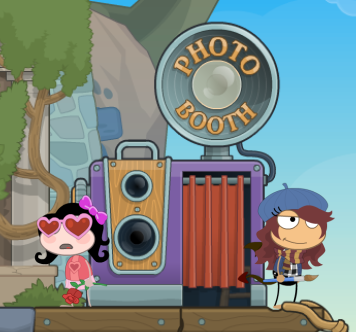 Well, I hope you all have a great Valentine’s Day weekend whether you’re taken and not mistaken or just single and ready to mingle. 😉

P.S. Be sure to check out Part 1 of Blake’s Valentine’s Day Special! So far, both Sam and I have been shipped with a cactus… who knows what will happen next? 😀 Stay tuned for Part 2 coming on Valentine’s Day!

Once you open the photo booth, Poptropica gives you a heart-warming card greeting! (Aw, we love you berry much Poptropica!) 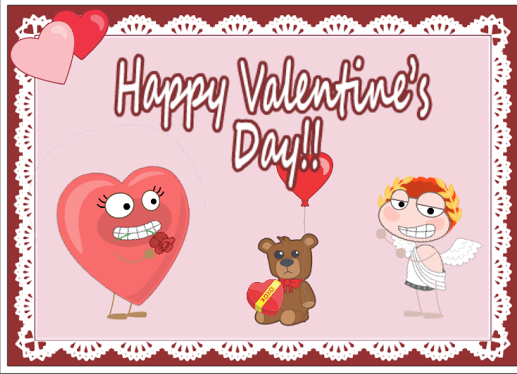 Moving along, there are new Valentines related props, backgrounds and characters on the app! This includes the Heart, Cupid, some UFOs, candy hearts and teddy bears! Check them out in the gallery below. Don’t worry guys, it’ll be added to the desktop version and KindleFire version next week! 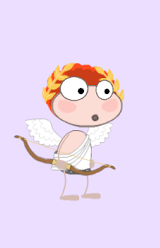 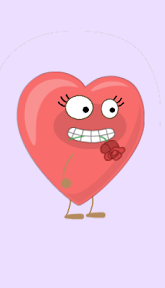 On the other hand, Poptropica also released the promotional website for the Mystery of the Map graphic novel (coming 3/1) and features a slide and video about it!

Speaking of Poptropica, did you know that they have a giant Back Lot poster in their Headquarters? You can also have one here! (This was posted on their Facebook page and Instagram account.) 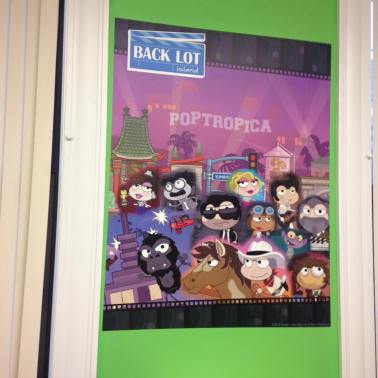 And that’s all of the updates we have today! What do you think of the recent updates? Leave a comment below! Oh yeah, here’s a Valentines card for all of you. 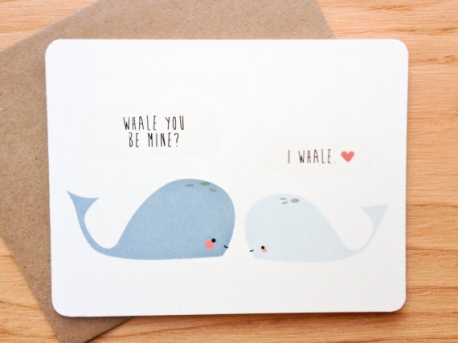 Hey guys, my name is Brave Tomato and here’s my first update post since… Pelican Rock was revealed to be surprise-released later that day… okay, sorry I haven’t posted much. Being a senior in high school is fun.

Well back to the point of the post. As of Tuesday, the Photo Booth is now available on the iOS Poptropica app! Now, anywhere you can get decent reception in the world, you can put your mobile characters and other well known characters on a screen together making up poses, props, and all sorts of hijinks. Sorry, the update is not available for Amazon and Android users yet, but it will be soon! 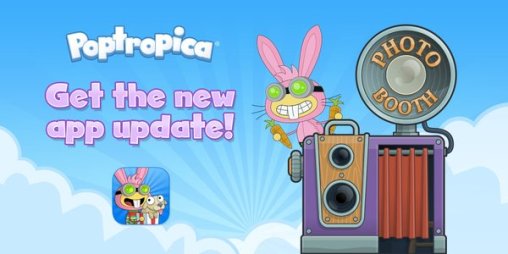 In other news, something interesting had been found in the past two Daily Pops: 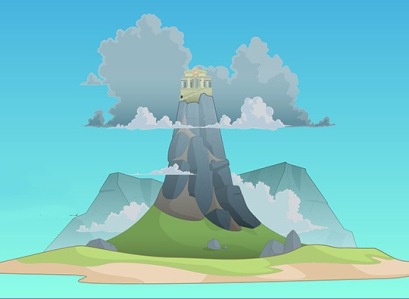 Olympus has Risen: We’ve always had our heads in the clouds. 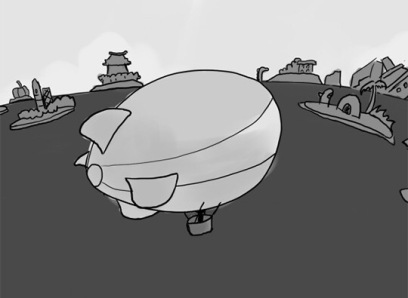 … And all of a sudden I feel like a bunch of eyes are looking right at me through the computer screen. Don’t worry, the “Olympus has Risen” one is not what you think, evidenced by the next day’s “Bloon” Daily Pop. This feels like it would be an updated version of an Island Tour video or clip or whatever, giving close-ups of island icons and such. There are comparisons to storyboards not too unlike when they were preparing the Shark Tooth animation. (Speaking of which, what happened to Poptropica TV?)

Finally, the Creators are using their social media connections to create a different kind of advertising – for Kung Fu Panda 3. Players are encouraged to go into the Home Island arcade (common room) wearing the Baby Pandas headpiece, and Pop Creator Skinny Moon will be grabbing screenshots and posting them on Poptropica’s social media. Here’s a tweet with several of the pics she took:

It's #PANDAmonium! I've been popping in the Home Island common room (arcade) & getting pics of you guys & battling! pic.twitter.com/irmKs4zkgb

You can find more pics like this on Poptropica’s Twitter feed now, and keep an eye there for if/when Skinny Moon announces when she’ll be in the common room! If you’d like to get in on the action, just know she’s been practicing her head-to-head gaming and has so far achieved a 2-star battle ranking.

So that’s just about what’s new in Poptropica! Smile with those cubs for the camera, snap a Photo Booth pic, and get ready to see another new perspective on the world of Poptropica!

If you are a prisoner of Pelican Rock, promptly make your way to the new Photo Booth at the Main Street preview of Escape From Pelican Rock Island, which comes with new prison-themed templates, characters, backgrounds, and props. Try not to smile when your mugshot is being taken. 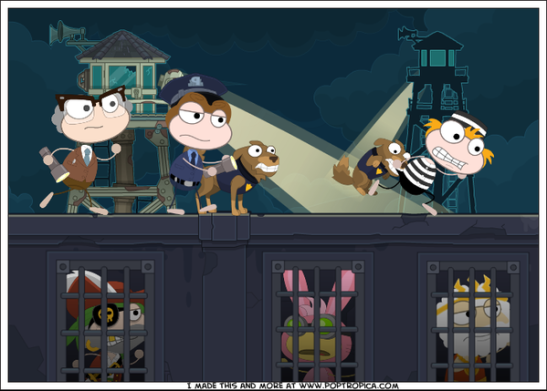 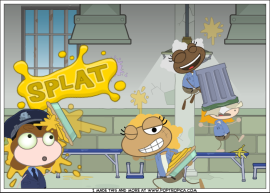 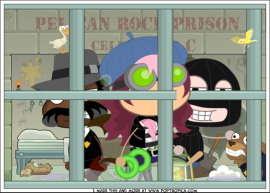 You will meet a host of other characters at our high-tech photo station, including the Booted Bandit, Big Tuna, Florian Fosbury, Patches, Ratchet, Tex Brannigan, Warden Sharp, and Escapee. Who are these people and why do they exist as both male and female? Stop asking so many questions, prisoner!

(You may have noticed in the EFPR Island preview that the NPCs’ genders are the same as your character’s, and it looks like this may continue in the rest of the island as well considering the Photo Booth characters. Check out this Daily Pop from last month for more!)

Poptropica also tweeted out another batch of early sketches of Reality TV Island characters. Here’s both the new one and the one they shared earlier (click to enlarge images): 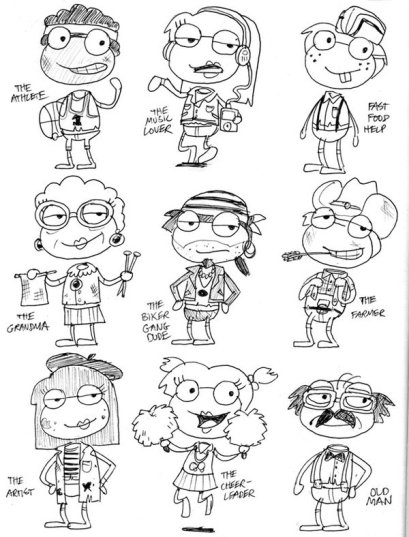 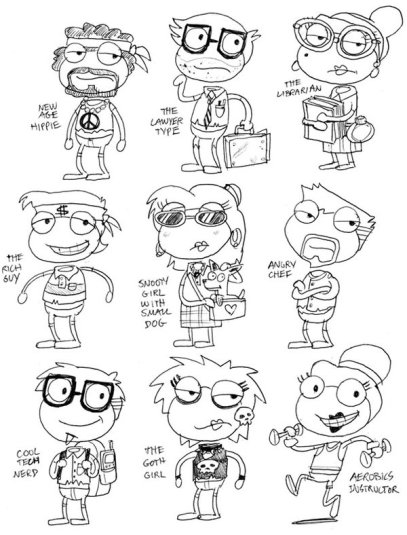 Speaking of Reality TV Island, congratulations to Quick Dragon for being the first resident of the small Pacific Island nation of Vanuatu to place on the map (#1,817 worldwide), earning a shoutout on the Creators’ Blog! Beat the island today and you too can have a spot on the map.

Check out the posts below to know what else is going on in Poptropica!

Thanks for popping by, Poptropicans.

Happy Halloween, Poptropicans! It’s finally time to unveil the winners of this year’s PHB Halloween Competition, which came in two parts: costumes and Photo Booth. We’re celebrating our recent milestone of 20 million hits by choosing 20 winners; 10 for each portion. Here we go…

Mirror, mirror on the wall; who’s the scariest of them all? Well, the PHB team enjoyed looking at the great number of ghastly garbs that dared to enter this hallowed competition, and we’ve finally narrowed it down to ten of this year’s best! These guys get the honor of being shown on the front page via this post, as well as having their costumes immortalized on the PHB’s Costumes page. Check ’em out:

The Creators may have held their own Photo Booth Halloween challenge, but we were first – and we did promise to award memberships to the winners! 😉 Check out these spine-chilling spectacles created right in Home Island’s Photo Booth (with a bit of clever image editing in #2)!

If you are one of the Photo Booth winners, check your email for a message from the PHB regarding having your membership awarded to you. #1 gets a 6-month membership, #2 and #3 get a 3-month each, and #4-10 each get a 1-month! Might come in handy for the upcoming Escape from Pelican Rock Island. 😛

We had hundreds of entries for the PHB’s 7th Annual Halloween Competition, and regardless of whether or not yours made this list, thank you for participating! If you’d like to check out everyone’s entries, browse the comments section of the contest post before it’s too late. 😉