It’s me, Purple Claw, with some behind the scenes info about – you guessed it – Wimpy Boardwalk! This exciting little Island, along with Wimpy Wonderland are April’s Islands of the Month, which means everyone gets extra credits! Yup, even non-members!

As you probably know, if you complete one of these islands for the very first time, you’ll get 500 credits! And if you’re a pro on the Wimpy islands and you’ve already beaten them; no worries, you’ll be getting 300 credits for re-playing them! Enjoy the credits and as well as the sketches you’re about to see below, searched by the lovely Skinny Moon. 😛

Skinny Moon was kind enough to show us a couple of early sketches about the beach and the arcade of this boardwalk. Let’s check them out!

The first image might be uncolored, but it looks a LOT like the current beach. The arcade had quite a makeover, since the roof, font, and the inside of the arcade changed. Also, a little shirt stand was added, named ”TeeTime”. First designs aren’t always final designs, and the second and third image (and some other sketches you’re about to see) can confirm that.

Hmm, the images below showcase the early design of each game stand, and how much they changed during the production of this island. I personally prefer the current design, but the early ones aren’t bad at all!

The first image looks more like a carnival, the second one looks medieval time-themed, and the third one seems to be a mix of both. 😛

And last but not least, I’d like to show some sketches about the fun (and dangerous) rides of Wimpy Boardwalk: 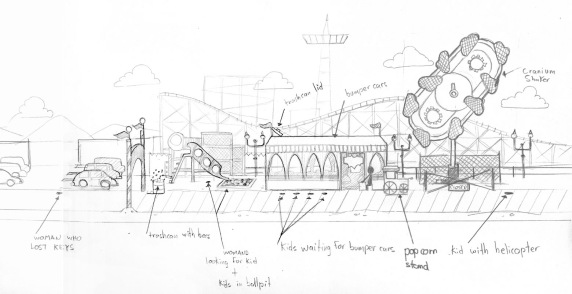 The early sketch is really stunning in my opinion, by looking how complicated and filled it is. The background is what amuses me the most. Again, the ”Fun House” hasn’t changed a lot, but it’s nice to see all these awesome sketches and see the differences between early and finished designs!

Well, what do you think? Which place changed the most? Share your thoughts in the comments below! I’ll see you soon, and don’t forget to earn these extra credits! Keep poppin’!

10 thoughts on “Behind-The-Scenes: Wimpy Sketches For Your Favorite Boardwalk!”